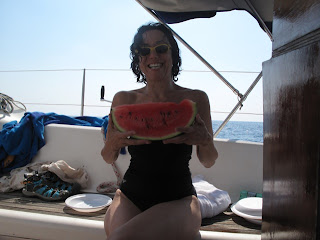 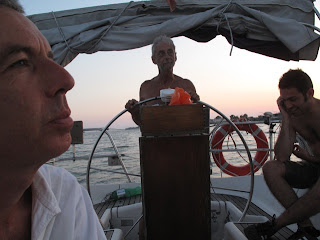 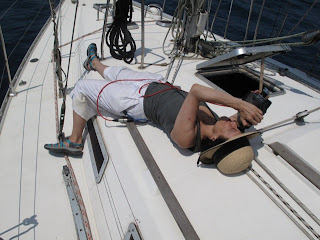 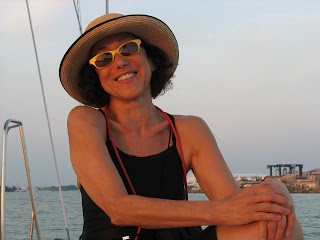 Hot and hotter. Just back from Ireland which was cool cooler coolest. Green fields topped with clouds etched in black, ranging from white to dark grey. Shetland ponies and the most delicate chestnut horses along with black/white cows and sheep---all in high contrast to Rome's terra cotta burning! I wore all my sweaters for many of the days I was there, the poetry room particularly cold with sitting.

First though to go backwards, last Monday was it just the 12th? I rented a sailboat out of Ostia /Fumicino for the shoot as my 'free' boat never happened. Went with crew of two—Benoit as my Shelley stand-in (!) and Stefano from the Academy as the cabin boy, Eugenio g. who was the real captain will have to stand for Edward Williams who captained Shelley's boat. They all went down in a storm off Leirici. We had no storm however! It was sunny hot, but lovely on the ocean. After initial shooting, the light staying put at top of the day, we drank prosecco and ate Panini and afterwards, watermelon, diving off the boat into 83 meters deep of water while the captain tacked round us! Later we went in again in shallower water, anchored. As the sun began setting I started shooting again, catching the silhouettes of the 'crew'— abstractions, the water. Few clouds to speak of but hopefully the severity of the light, the black silhouettes, chasing the sun will work. I see the results tomorrow when I pick up from lab.

The day after sail, I trucked over to lab to drop off 'dailies' and then back to pack. By evening I knew I was sick which I still am—with cold? Sinus infection? Not sure—but had to go on. So I did.

Wed I fly out of Fiumicino reading roberto boleano's amuletto which is marvelous.
so much about history and love and living inside desire. the clouds out the window ecstatic caverns at the bottom of the world above ours. I talk to my fellow passengers: a black man Maximillian of the church about to fast for a month on a isle off ireland's coast and a woman named Martina—her father wanted a boy—so she says she doesn't even have her own name. i tell them i don't believe in god, i believe in the infinite. the words roll off my mind...i think mind rather than tongue..and i can tell they think i have no faith. i say god is inside us and she Martina says we could talk about this for hours. but i don't want to . god seems so much less to me. the world so much more

"His forehead was broad, but it didn't have the sort of breadth that suggests intelligence or sound judgement; it had the breadth of a battlefield, and the battle had been lost, to judge from the rest of his face: thin lank hair falling over his ears, a skull more like a dented bowl than a noble dome, light eyes staring at me with a mixture of suspicion and boredom. in spite of everything, i found him attractive (i'm a born optimist).

[hope you laugh at that last one. i did aloud]
"Tears, how many nights have i spent pondering them, to come to such meager conclusions."

We land in Dublin. Dobz, a lovely guy with big head of black dreads picks me up in his new Volkswagon sedan and drives me to Cork. The vista of the fields and the clouds and the cooling were marvelous. 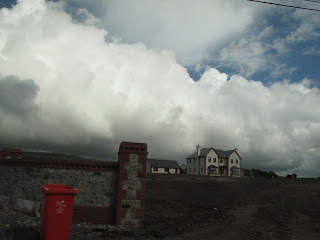 The show is in an old tram station, large and voluminous, the screen nearly 12 feet high and just as wide. Grand as is the audience: 200-300 people. everyone surprised at the high turnout: artists, filmmakers, poets, critics, curators. Drinks first and films when the sky got dark enough--the ceiling skylit. Audience didn't laugh as much as i would though one woman later when i mentioned same, said "there was momentum in the row" (fabulously flat description i think)—this at a point in my film MIRROR WORLD when the vagina speaks—its very very funny, a slap in the face to Lacan which no one has to think of, just this gorgeous hairy slit mumbling...and then LIGATURES, the most recent, very simple but it almost made me cry—so profoundly about desire and mirroring.

People seemed to appreciate the work and kept in next five days appearing out of the woodwork: like the clerk at the food coop serving me suddenly whispering how much he liked the films or the Italian couple at another event not recognizing me and when hearing my name saying how much they enjoyed them.

Meanwhile, my nose is dripping yellow phlegm, heavier and heavier. Disgusting yes. Despite hot toddy and hot bath and lots of lemon and water. It is a full-fledged summer cold and everyone says it is harder to dispel. but dispel it i must so i am on benydril and vitamin c and sleeping alot in cool air with sun peering out from under clouds---it is all grey and greeny and silvery. exquisite little town of Cork, important port when under English rule. With a river at the center--actually the river splits so the downtown is an island.

Next day I give my reading. Feel good about it though an odd mix of readers: the first quite traditional, then me who I thought was strong, then a performer type from Cambridge. Solid all together. The readings got off to a slow start with the earlier one Thursday but they seem to be steadily improving.

Friday morning Dobz takes me out of town, tooling around the west coast of Ireland and stepping into the ocean there, 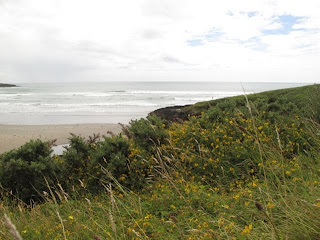 Cold clear and reminiscent of nova scotia which I miss---people are writing me to get on up there! Then we locate a fantastic restaurant since the Celtic Tiger of the past few years has way improved irish food. 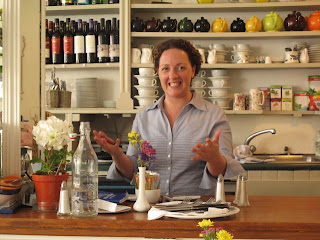 And I have the best prawns, really small lobsters I have ever had at an adorable place Dillons in seaside village of Timoleague. All go there please. You will have great food

That evening we meet up with Maggie O Sullivan who arrives who is amazing and I have been a fan for decades. Now talking and sharing. It was sweet, she in red with green bag and I in green with red bag. We were inverse twins. That Friday night we jump off in crazy taxi with driver who doesn't know cork to "couscous" at the cricket club (!) which had 30 poets reading 5 minutes a piece. It was odd and marvelous with one thinking repeatedly now why don't I try that in my poetry! Lovely and fun. 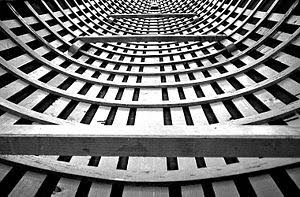 Saturday morning I go with Dobz and his girlfriend to row in a currachs. Which is an Old style irish rowing boat for the high seas. Four rowers rowing sticks (like big toothpicks) in a tar shell round wood ribs. We went down river---Cork is the venice of ireland or was— stepped back before the currents could catch us, stopped for coffee/tea and i got to row on return. Hard to get "in tune" but i did, you just follow the back before you. Nice to move the body for sure after all this traveling and sniffling.

More poetry again with Americans on that night. Mixed I thought but really enjoyed jean day's new book. Inspiring in its perfect control and jumpy observations. Not sensual particularly but controlled and ready with an earned calm.
That night at Trevor Joyce's place, 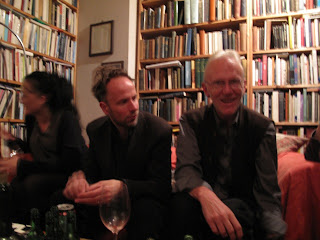 lined with books and poets and poetry—time for intimate conversations over poetics of poetry and film. Good conversation, then out at 1:30am onto rainy streets over cobblestones with black figures sliding through against the stone walls of the houses. A bit like Watts out of Beckett which has a scene here in Cork!

Last day a reading with irish language untranslated, wonderful slithery sounds, lots of a's and i's and then three young Cambridge boys: each good and each revelatory of their own space so there was a slice of sameness with all the differences already in place: the earnest quiet politico talking about Palestine, the gay boy dropping in and out of sex, the always jumpy one talking about topical events and California. 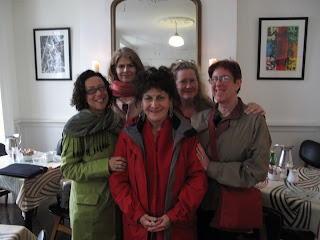 B picks me up at airport (so kind) and takes me to dinner at biondo tevere, a Roman restaurant with a terrace over the river, then home to hot room at academy. I wake three times to shower before finally getting sleep and then up. We hope to go to procida; will hear later in the week.